When is a bank not a bank?

If you transplanted Shakespeare into a Starbucks, sat him down, and described the way most incumbent banks work, he’d nod along in agreement, thinking it sounded pretty familiar. The fundamental principles of deposits, lending with interest and money transfers were laid down in the 17th century, and the central functions of banks haven’t changed much since. However, the core premise of a bank – to build wealth through interest and provide access to capital – is being eroded, with customers essentially earning zero on their deposits, while being aggressively marketed credit cards and other financial products with high teen APRs.

The neobanks have capitalized on this entrenched way of doing business, and the banks they are imagining into existence break from this model, forging a path of their own with the new marketplace model.

What is the marketplace model?

The marketplace model reimagines the central function of a bank. From a simple warehouse for funds, with a modest interest incentive, to that of an active partner, helping customers discover and utilize new methods for making their money work for them, including those provided by third parties. They see themselves not merely as custodians, but as curators of consumers' entire world of financial products.

The marketplace treats the provision of checking and savings accounts as a starting point. Upon this base, it offers a carefully curated set of products and services that enable users to make the most of their money. Cryptocurrency trading, insurance, robo-advisors, cashback incentives, and innovative savings products (e.g. transaction round-ups). Crucially, these services are often provided by third parties, with the marketplace providers then taking a cut of the transactions that take place through their platforms. Importantly, they don’t see these services as enticing sparkles on top of their core savings products, they see them as part of their core product. They understand that competing on fractions of a percent of interest, and marginally better UX than other incumbents, is not a way to build sustainable competitive advantage. Because sustainable competitive advantage comes from providing regular value to customers.

75% of US consumers manage their own finances, with no help from a professional or online service. This opportunity is where the marketplace model excels. It fills the gap in the mass market between passive account management and expensive independent financial advisors, accommodating a wide range of financial needs.

This model of marketing to a captive audience of account holders is nothing new, it’s the staple of the incumbents, but it differs in two key ways. Firstly, the majority of the services offered by neobanks are from third parties, and actively marketed as so. Secondly, the variety is significantly larger, encompassing the range of products from savings accounts to IFAs, as previously mentioned.

​A visualization of Monzo’s connections to auxiliary services 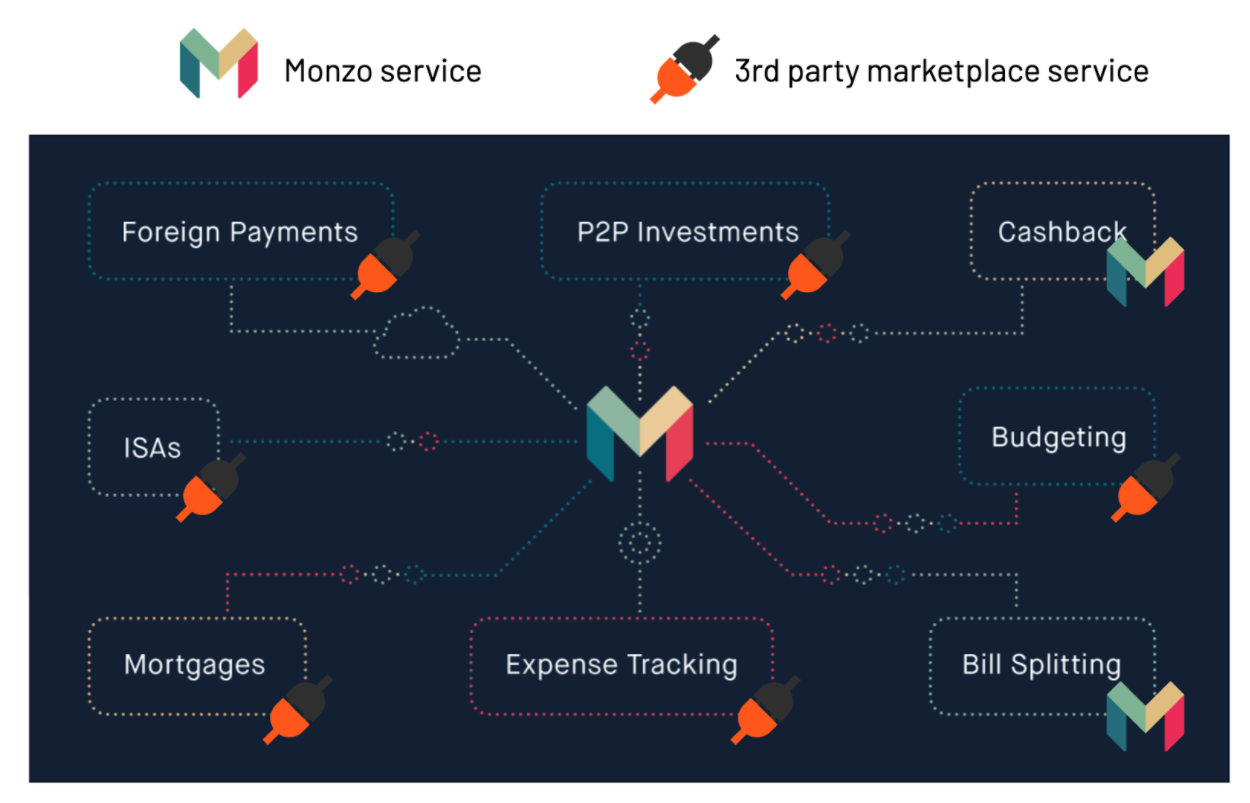 Why is it important?

In short, marketplaces give more opportunities to capture customer value.

Increasing the Lifetime Value of customers

The neobanks see the value of a customer coming not from their passive ability to generate revenue from loan interest, but from owning the relationship they have with their capital. Apple capitalized on the growing reliance we have on our devices, transitioning to a services company. Their services division is projected to bring in $55 billion revenue in 2020, accounting for 45% of their gross profit. I was at Microsoft in 2014 when it went through the transition to a devices and service company – Azure is now one of its fastest-growing business lines. This services ecosystem is where neobanks are aiming at.

The more connections a user's account has with third party services, the higher the switching costs. Although temporary, the ‘hassle factor’ shouldn’t be discounted. A recent study showed Irish consumers lost over 1000 euros over 4 years by not switching their gas or electricity suppliers. Although banking customers in general rarely change accounts, millennials are more fickle, with 1 in 3 open to switching banks in the next 90 days.

Capitalizing on the innovation of others

The iPhone at its release was an expensive phone, and not much more. Famously disparaged by Steve Ballmer (“$500 for a phone!”), the true revolution of the iPhone was the launch of the App Store in 2008. A fully touch screen device, coupled with a simple route to market, spurred the greatest wave of innovation in product design since the birth of the internet. The iPhone evolved, from a device to a platform. This evolution unleashed the creativity of millions of designers, developers and product people to create services that ultimately improved users' experience of the iPhone. This increased device sales, and created an enormous new revenue stream for Apple. A marketplace approach unlocks this same opportunity for banks.
​

In addition to the general march of innovation, in Europe, this rise of marketplace-based business models has been accelerated through the adoption of Open Banking regulations. These mandate all consumer banks to have an API, with a common structure, that enables users to connect third-party services directly to their accounts. This has dramatically lowered the barriers to entry for emerging FinTech providers, giving them simple access to a wealth of consumer financial data, if they can demonstrate value in exchange. As with consumer privacy regulations, it’s a matter of when, not if, it reaches the US. 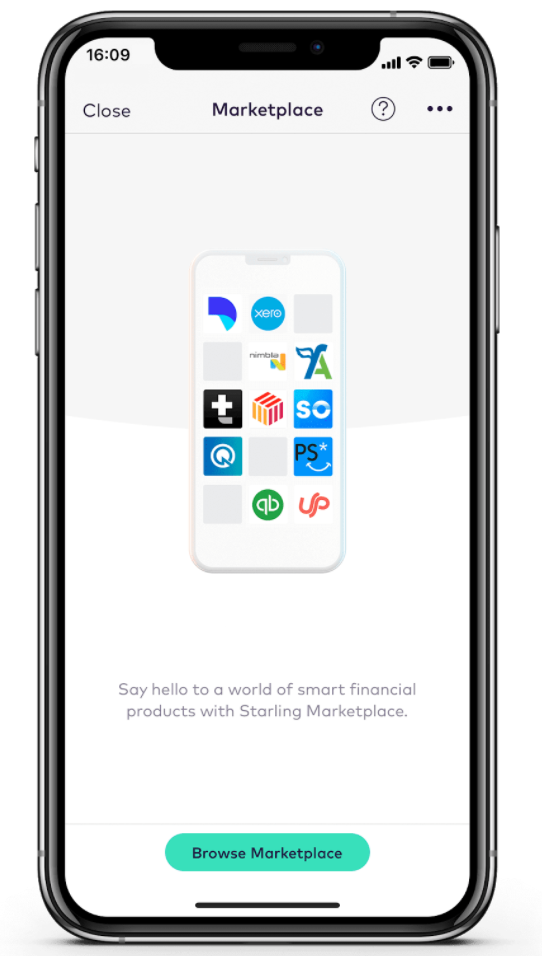 How should incumbents respond?

COBOL is not conducive to moving quickly. Emerging banks have predominantly cloud-based architecture that allows them to scale and release rapidly. Here’s Monzo’s discussion on moving to AWS last year. Companies such as Thought Machine are emerging, holding the promise of a route off of legacy for the incumbents.

The Open Banking APIs are a gold standard for what an API for a bank should be. Encompassing account activity and creation, they're a fundamental part of a marketplace strategy. Here’s a standout example of an integration with IFTTT. The best partnerships in the existing marketplaces involve deep integration, enabling simple sign-up for consumers, usually without even leaving the neobank’s app.

Constant user testing, releasing little and often to understand what users want and if your feature is satisfying their needs is key. Understanding the services that aren’t currently provided in easy to access formats for users, and identifying partners that can provide them. Success in marketplaces comes from providing customers the niche offerings they want, not just the cheapest.

Companies need to not lose sight of the fact that, without a simple and delightful UX around the day-to-day needs of checking and savings accounts, customers will go elsewhere. Neobanks experience of managing and moving money is second to none.
​

Although the scale of incumbents is protecting them for the time being, the long-term opportunities that exist by moving to a marketplace model, in addition to the rewards from conventional account management, are what the challenger banks are betting on. If Microsoft was still relying on selling Office CDs, and Apple was on early iPods, they’d no longer be here. Marketplaces, populated with partners that can provide meaningful commercial relationships with users, offer the potential for a significant additional revenue stream for incumbents. The advantage of huge existing customer bases is theirs, it requires bravery and vision to realize it.
​

- Good summary from Monzo’s Head of Partnerships about the considerations around incentives.

- Concise but informative explanation of Open Banking and PSD2 regulations for those unfamiliar with the intricacies of them.
​